If you have a passion for cats, or an interest in anything fast, then you’ll probably know a bit about cheetahs. Want to find out even more? Well you’re in the right place!

Quick, agile and sprinkled with spots, these big cats are the world’s fastest land animals. In this article, you’ll learn informative and fun facts about these beautiful cats.

How fast can a cheetah run?

The cheetah has a top speed of about 120 kilometres per hour. But, cheetahs are like olympic sprinters, and can only maintain this speed for short bursts of time. 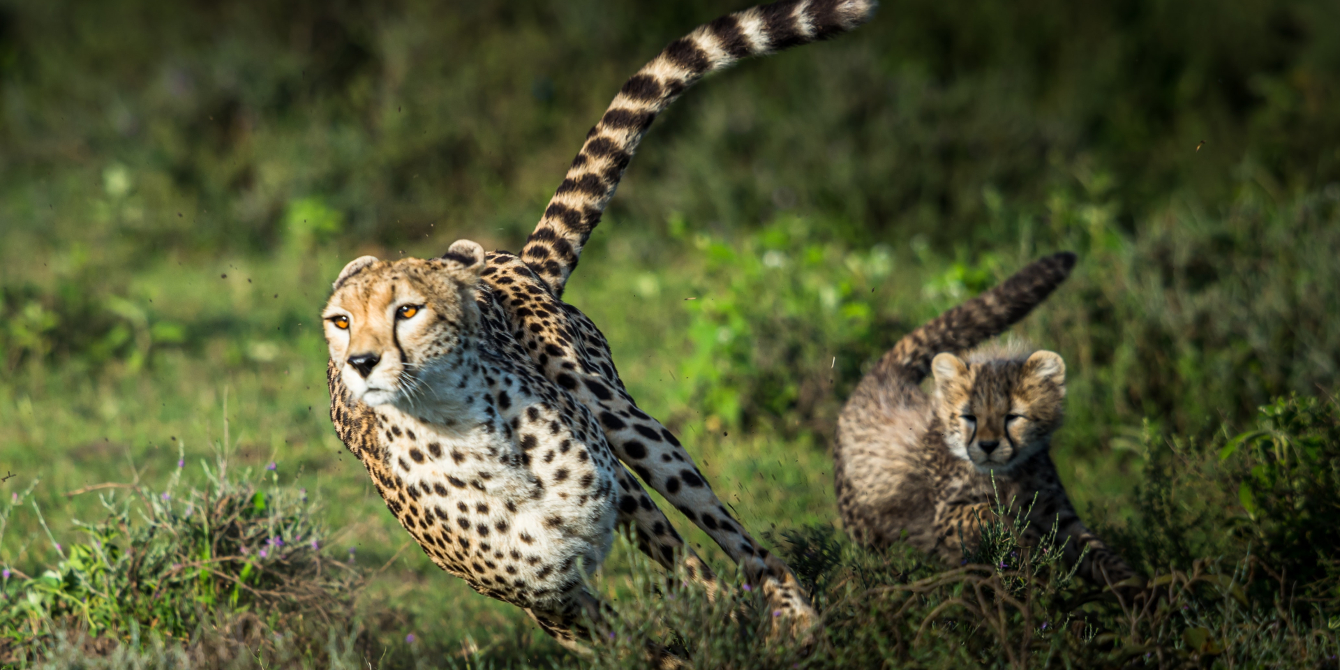 What allows cheetahs to run so fast?

There are quite a few cheetah adaptations that have allowed this creature to earn its title as the fastest land animal. Here are some of the features that make them so speedy:

Where do cheetahs live?

Cheetahs live in a wide variety of landscapes, but are most commonly found in dry, open grasslands. They may also spend time in denser vegetation and rocky terrain. 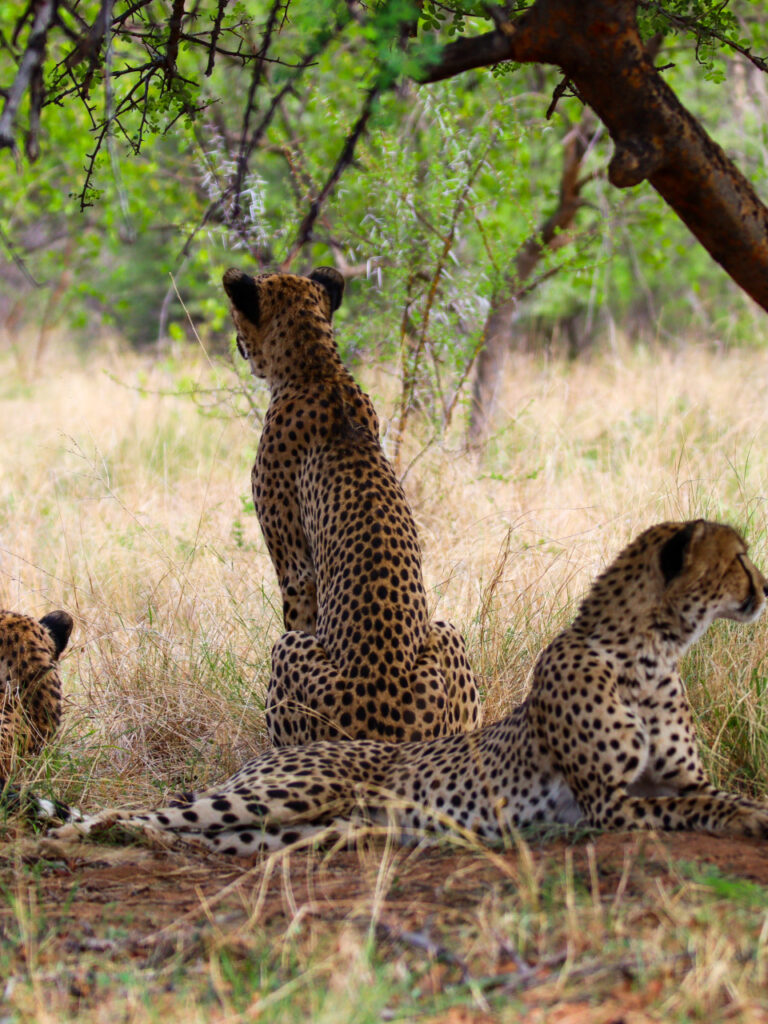 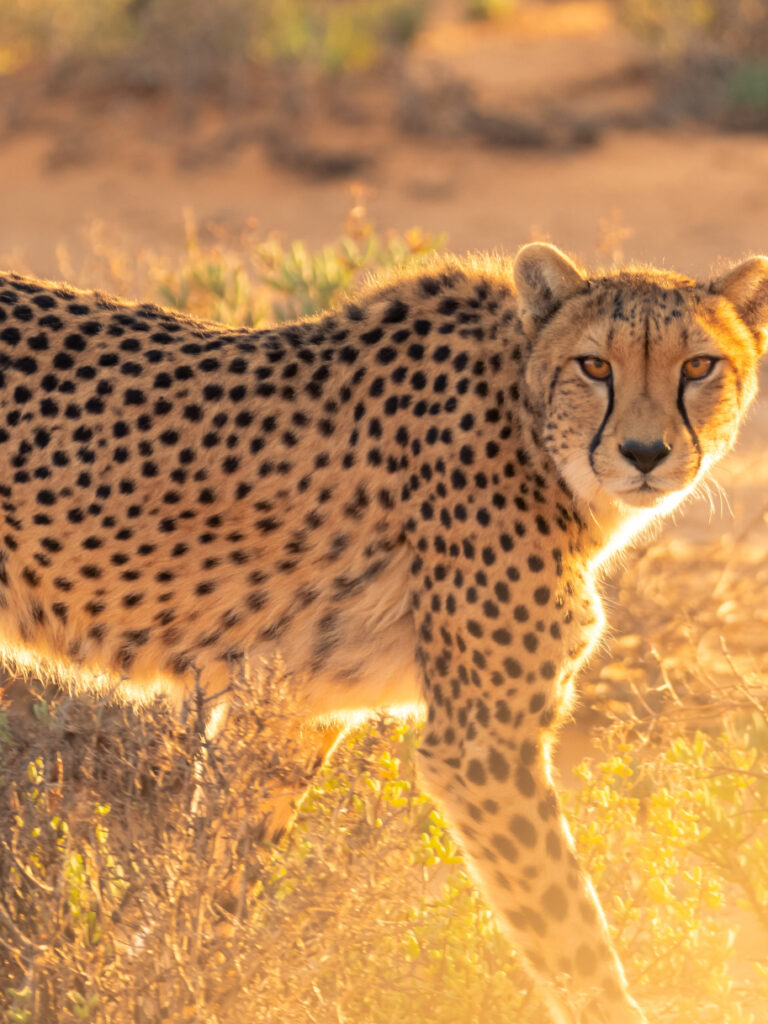 Cheetahs can be found napping under trees, in tall grasses, on rocky outposts or hiding in the shrubbery.

Cheetahs prefer dry, hot climates, but aren’t fond of deserts or tropical areas –  although there is a small population of cheetahs that can be found in the Sahara desert.  Certain areas in southern Africa – namely Namibia, Botswana and South Africa — tick all the right boxes and this is where cheetahs are most common.

What do cheetahs eat?

Cheetahs tend to target smaller and faster animals because they themselves are nimble and quick. They do not have the same strength and power as a lion – which is why they tend to target different prey species. Due to their speed and prey targets, cheetahs catch up to 50% of their prey, unlike lions which are less successful.

Cheetahs are susceptible to kleptoparasitism, other predators stealing their food. This means that if they take down a big mammal, it would likely be stolen from them by lions or hyenas, while they’re catching their breath after a hunt.

What sounds do cheetahs make and how do they communicate?

Cheetahs don’t roar like their lion relatives. But, they do make a specific set of sounds that researchers have yet to categorise.

Some of the most easily distinguishable cheetah sounds include purring, meowing – also known as a bleating – and a bird-like chirping or high-pitched barking sound. There is also a unique set of sounds mothers use to communicate with their cubs.

Like other cats, cheetahs also use smell to communicate. They do this by urinating at certain locations to let other cheetahs know that this is their home territory.  And, in the case of females, these smells also signal when they are looking for a mate.

What is a group of cheetahs called?

Cheetahs are the only wild cats, other than lions, that live in groups. These groups of cheetahs are known as “coalitions” and are usually made up of a group of brothers.

Female cheetahs that have cubs are solitary animals. But, if the female isn’t currently rearing cubs she might hang out with other cheetahs – most often her own brothers or sisters.

Cheetahs don’t have a seasonal fertility cycle. This means that you could spot a cheetah cub at just about any time of the year.

Cheetah embryos take about three months to mature after conception and there are usually three to five cubs born in a single litter.

Like many cat species, cheetah cubs are born blind, and only start walking at around two weeks.

They are also born with a kind of “mohawk” of long downy hair running from the top of their heads down their backs. They lose this spiky crown as they grow up.

A cheetah mother moves her cubs to a new location every few days, to hide and protect them from lions in the area. Until the cubs are able to walk on their own, the mother will move them by carrying each cub by the scruff of its neck.

As the cubs grow up, cheetah mothers will use their tails and a series of specific sounds to guide their young from place to place.

Cheetah cubs will drink from their mother until they are about three to six months old, and start eating meat when they are between five and six weeks old.

The mother will also bring home wounded, young or weak prey for the cubs to practise their hunting skills on. It’ll take many months of practice before a young cheetah gets to secure a kill by itself.

Most cubs will hang around with their mom until they are about one or two years old and then gradually move away.

Who are cheetah’s predators?

Technically cheetahs don’t have any predators, because they aren’t preyed on by any other animals. However, a large number of cheetah cubs are killed by other predators, like lions.

In fact, the mortality rate of cheetah cubs is around 70%, and most of those fatalities are lion-related. This means that most cheetah cubs aren’t able to reach maturity and reproduce.

Another contributing factor to the cheetah’s mortality rate is that their food is often stolen by other predators – like lions, leopards and wild dogs – as well as scavengers such as vultures and hyenas.

What is a cheetah’s lifespan?

Cheetahs often live for 10 to 12 years in the wild, but can survive up to 20 years in captivity.

Cheetahs are not an active threat to humans, and are rather docile compared to other wild cats.

But, cheetahs are still wild animals, and you should never attempt to touch a wild cheetah. This is important for your own safety, as well as for the cheetah’s well-being.

Leopard vs cheetah: What’s the difference?

They’re both spotted African cats, so it’s easy to get confused. But here are some of the main differences between leopards and cheetahs:

How many types of cheetahs are there?

The cheetah is the only species of its genus, Acinonyx.

There are five subspecies, two of which, the Asiatic and Northwest African cheetah, are classified as critically endangered.

The other three – the South African, Sudanese and Tanzanian cheetahs – have higher population numbers, but these have still declined in recent years.

How many cheetahs are left in the world?

Today there are 6,674 mature cheetahs left in the wild.  Researchers believe that this small and decreasing number of cheetahs is because a large number of these animals live in unprotected areas.

Find out more about GVI’s cheetah conservation opportunities, and see how you can make an impact in the conservation of the world’s fastest land animal.

Speak to us about special offers

Make it happen
Share
Apply
what’s up next?
15 of the best wildlife conservation books

From books about human connections with animals, to authors who advocate for climate action and beautiful coffee table books – here are 15 of the best wildlife conservation books.