+44 1727 250 250   Apply Now
Announcement
TRAVEL UPDATE: We're open! Where can I go? and answers to your questions about COVID-19
Zaytoen
Domingo
Zaytoen Domingo is a content writer and editor based in Cape Town, South Africa. She is currently enrolled in the Masters program in English at the University of the Western Cape. After graduating with an Honours Degree in English and Creative Writing, Zaytoen completed a skills-development program for writers and became an alum of the GVI Writing Academy.
0 Likes
Share
Facebook
LinkedIn
Twitter

Birds of Peru: birdwatching from your side of the world 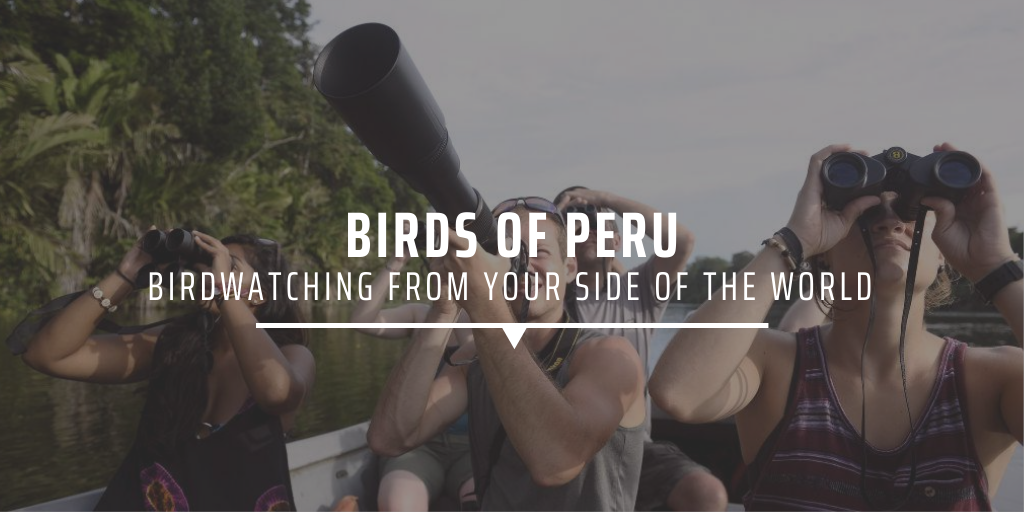 Are you looking for a hobby that you can do at home while you can’t travel anywhere else to do it? Find out how to put a twist on birdwatching as we learn more about the birds of Peru.

Also known as birding, birdwatching is an activity that involves the observation of birds. This can be done with the naked eye, with equipment like binoculars, or even just by listening to their calls.

Most birdwatchers use a bird field guide to help them identify birds by noting key characteristics, like unique feather patterns to look out for in certain species. There are also different levels of birdwatching.

An ardent birdwatcher might travel far and wide to spot rare bird species. They could go as far as taking trips overseas to spot indigenous birds around the world. The common, but still enthusiastic, birdwatcher might aim to spot every single bird in the bird field guide while sticking closer to home. And another birdwatcher might just be happy with spotting any birds at all, wherever they are in the world. Whatever the case, birdwatching is a relaxing pastime for anyone who loves to appreciate these soaring creatures.

Well, Peru doesn’t hold the title for having the largest population of birds in the world, but it is popular for having a large and interesting variety of bird species.

You can experience birdwatching in Peru or anywhere else, from where you are right now. Walk in the shoes of a birdwatcher with this list of four of the best birds of Peru.

Four of the best birds of Peru

Before we get to the list, it’s worth keeping in mind that all birds are important to the skies, and the ground (for those that can’t fly). We’ve just picked out four of Peru’s most interesting feathered friends. A dark shadow of wings spanning 3.2 meters wide, is cast over the great Andes mountains. A black figure with a red head, weighing 15 kilograms, soars above the mountain peaks.

Watch it soar across the Peruvian sky.

Did you know that the Andean condor is a national symbol of many South American countries? These include Argentina, Bolivia, Chile, Colombia, Ecuador and some of the Andean regions of Peru.

It plays an important role in Andean mythology, as the ruler of the upper world, and is a symbol of divine power.

The Andean condor can be spotted gliding across long distances in the windy sky, in search of carcasses of deer, cows and other large animals.

Did you know that they prefer windy conditions because the wind helps them to glide without having to exhaust their wings? This is especially useful because they’re heavy birds and this allows them to fly for longer and further without getting tired.

After spotting an Andean condor in the mountains, a birdwatcher may choose to take a walk through the cloud forests of the Andes mountain range, which houses over 300 bird species.

A cloud forest is a tropical forest that is covered by clouds or fog.

Hoping to spot one of the other birds in the bird field guide, the birdwatcher may get distracted by a bright-orange bird perched on a branch, bobbing its head up and down, and hopping on the spot.

What is that? Well, the bird field guide says it’s the national bird of Peru. And what is the national bird of Peru? It’s the Andean cock-of-the-rock. But why’s it called that?

That’s because the national bird of Peru is known for building its nest on rocks. The bright-orange cock-of-the-rock is actually the male of the species.

The female cock-of-the-rock has a monotonous brown shade on her feathers. The male has a bright orange upper body, a black middle body and grey wings.

If that isn’t interesting enough, have you heard of their mating dance?

Male cock-of-the-rocks gather in a group, called a lek. They then do a dance, which consists of hopping and bobbing to show off their attractiveness.

They also let out a loud squawking sound as a mating call. Turn down the volume while watching a video of the lek display. The hoatzin –also known as the reptile bird – lives in the Peruvian Amazon. Some people believe that the hoatzin is related to the Archaeopteryx – a bird-like dinosaur – because of its appearance.

Young hoatzins have claws on their wings just like the Archaeopteryx, but there isn’t any evidence to prove a relationship between the two.

Hoatzins are known for their unusually bad odour. This odour comes from their equally unusual digestive systems.

Because hoatzin birds hardly fly, except for short distances, they spend a lot of their time in trees. The bird’s main food source is vegetation, like leaves and buds.

The leaves are digested in the same way that cows and sheep digest their food, through a process of fermentation. Aside from the terrible smell caused by their digestive process, hoatzin birds don’t get hunted by humans because of their terrible tasting flesh.

What an amazing way for nature to protect its birds, don’t you think? Original image: “Spatuletail #Hummingbird” by 2ilorg is licensed under CC BY 2.0

If the name was enough to catch your attention, check out the tail on this bird.

This distinctive species has been described as having a body like a ping-pong ball, and a beak like a matchstick.

So it’s no wonder that a birdwatcher might miss this tiny bird while walking through its habitat in the Rio Utcubamba Valley in Peru.

You’ve just observed four of Peru’s most well-known birds. Don’t you feel like an almost-seasoned birdwatcher now? And you’ve done it from the comfort of your own home.

If you enjoyed reading about birds of Peru, visit our blog for more interesting articles to read on nature. And when you’re ready to leave home again, join one of our overseas programs.

Zaytoen Domingo is a junior content writer for GVI, and an alum of the GVI Writing Academy. The Writing Academy is a skills-development program that pairs development editors with budding travel writers. Learn more about the program here.

Eight scuba diving jobs you can get as a PADI pro
Read More
What it’s like to volunteer internationally, from international volunteers
Read More
Seven ways to get involved in marine conservation
Read More
Apply Now
Enquire Now
Call Back Request