Curieuse Creatures of the Sea Although I have already spent over month on Curieuse, the beaches, viewpoints, and animals continues to amaze me. While a fellow volunteer from last month, Anders, blogged about the diverse range of land animals on the island from Aldabra tortoises to skinks and geckos to the park ranger’s dog, I will touch on the critters living just off the coast in our waters.

Off shore from base, near the boat Dexter Crabtree, there are three common creatures I usually find on a daily basis. The first of which is nearly invisible to the eye and can be a bit of a nuisance.  Microscopic plankton and jellyfish come and go in swarms that sting you while you swim, though more annoying than painful as tiny pricks cover your body. Second, there are sea cucumbers scattered across the ocean floor and can be petted or picked up, feeling surprisingly less squishy than you’d imagine! The last should be admired afar as they can cause pain to the touch. Sea urchins also line the floors with brittle needle-like spines that fall off and puncture the skin when accidentally touched or stepped on. However, they are quite neat to observe as they slowly move across the ocean floor or others with bright blue patterns near their centers. Still close to shore though further down our base, there is the occasionally starfish with a vibrant orange pattern catching your eye as you swim. Even less common and quite hard to find is the nudibranch. Only an inch or two long, they can be quite easy to miss. Some come in bright colors such as orange and red while others are white with black patterns. 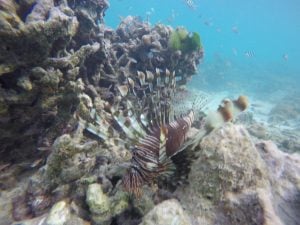 Travelling farther from shore, colorful parrotfish, angelfish, trigger fish, and on a lucky day, the majestic lion fish may be found.  When danger is sensed, this fish may protrude its fins, appearing to grow in size and add a new element of defence. While I have seen several lion fish act in this nature, I have seen others that appear more cowardly, darting into a crevice of a rock or coral. So, their heads are hidden but their bodies are exposed, almost like they are thinking, “If I can’t see you, you can’t see me”. Nearby, one of my favourite animals can also be found. Eagle rays glide by effortlessly yet quite quickly underwater with long trailing tails but can occasionally be seen jumping across the water.

Moving even farther out from shore, two more incredible creatures can sometimes be found. On a very lucky day, you may spot a reef shark or a lemon shark curiously swimming by. Unfortunately, most of the time you swim with a shark you do not realize it and can’t admire its beauty. Lastly, my absolute favourite creature (and possibly my spirit animal), the hawksbill sea turtle, might be gliding and floating along. Some may dart away at the sight of you while others are quite calm and even playful, swimming alongside you before heading back to feed or rest amongst the coral and sea grass. 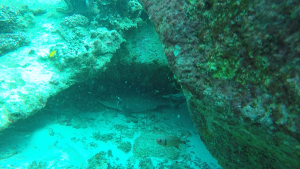 In such a small area of the ocean, the diversity of Curieuse’s creatures of the sea thrive. Even after five weeks, each day is a new possibility to explore and admire the wildlife in and out of the water. 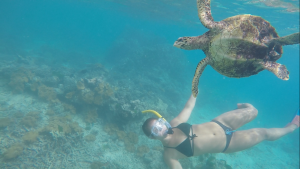