+44 1727 250 250   Apply Now
Announcement
TRAVEL UPDATE: We're open! Where can I go? and answers to your questions about COVID-19
Tasneem
Johnson-Dollie
Tasneem Johnson-Dollie is a travel writer living in South Africa. She has experience in public health nutrition and worked as a dietician before launching her writing career. She loves bringing her passion for public health and sustainable development to every article she writes. Her travels around South Africa as well as to India, Australia, and Saudi Arabia have fueled her passion for exploration.
Siem Reap Travel
0 Likes
Share
Facebook
LinkedIn
Twitter 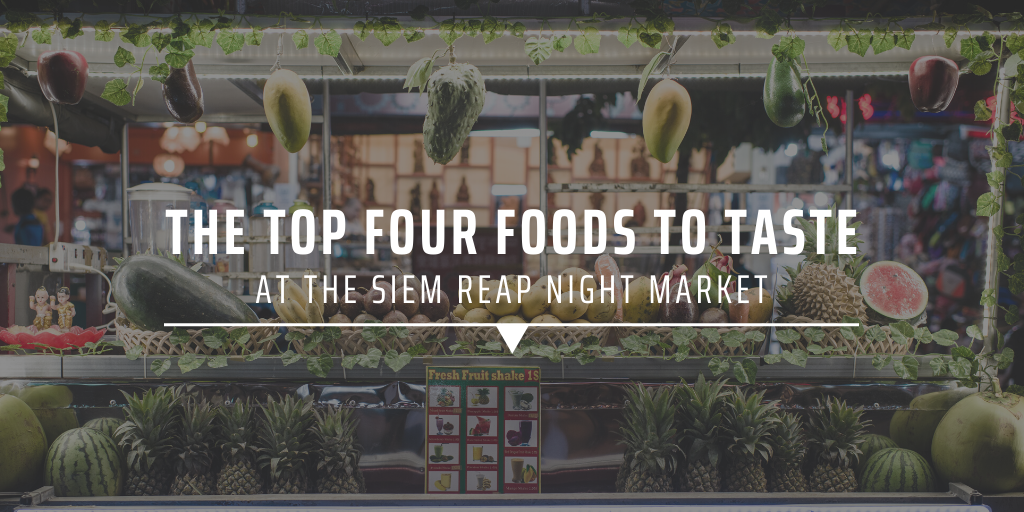 Follow us as we take a trip through Siem Reap’s night markets – at the top of the list for best things to do in Siem Reap – and taste the top four street foods found here. Kitted out with a travellers backpack, a good pair of walking shoes, and a second wind after a serene mid-afternoon nap, you’re all ready to take on the Siem Reap night market scene.

You’ve taken a tuk-tuk – a three-wheeled taxi with open sides – to a Siem Reap night market. As the driver swerves up to the sidewalk, and turns to collect his fee, you’re struck by the hum of steady sound coming from in front of you.

Then you pickup on the sizzle of grills, and the calls of shopkeepers, and the mix of food smells wafting by.

You’re intrigued to see why the Siem Reap night markets top the list of things to do in Siem Reap. You hand over the cash, and hop out of the taxi.

Scanning the cluttered setup ahead, you try to single out individual stalls in the canopied alleyways of the market. But you’re dazzled by the strings of coloured lights trimming almost every canopy, and the flashing signs marking each stall.

Swept up in the excitement, you stride towards the lit up alley closest to you, curious to see what’s for supper.

After some drifting, you finally get the first glimpse of smoke, curling its way up into the night air, and puffing into a great cloud. You hear the sizzling of something somewhere beneath it. You can’t quite see where it’s coming from, but it smells like barbecue, and that’s enough to get you diving between passersby to get a closer look.

Skewer sticks of meat balancing above an open flame tell you that you’ve found the source of the aroma. There are frogs, squid, and a large variety of fish on display, besides the usual chicken, pork and beef. The meat marinade drips into the embers, extinguishing small sections of heat with a hiss, and leaving even more barbeque scent in the air.

After putting in your order, the swinging of knives catches your eye, and you watch as the food vendor goes about her skilful chopping, and skewers morsels of meat before placing it down on the grill.

A few twists and turns of the skewer stick and your barbecue kebab is served up. Taking a tentative bite, you pick up on the familiar smokey flavours of the fire, but you also taste something different. It’s a sweet-and-sour journey, with puffs of onion and chives that pull it all together.

“Wow, so this is Cambodian barbecue,” you think to yourself and smile in satisfaction.

Lick your lips after some lort cha But there’s so much to see at this Siem Reap night market that you find yourself caught up in some clothes shopping. While stroking the soft fabric of t-shirts, and feeling the silk-like texture of a traditional Cambodian dress, you notice a noodle shop that sells the type of noodles you’ve seen on the travel channel. Clothes can wait.

There are so many noodle options, but the shop owner steers you towards the lort char, promising that you’ll like it.

Lort char is a noodle stir fry dish. This traditional Cambodian dish can be found at all of the Siem Reap night markets.

What makes it distinct from other stir fry dishes is the short, fat rice noodles, which are cooked with chives, garlic, loads of vegetables, and a protein of your choice. Top up with oyster, fish or soy sauce, and this street food gives you the sweet, savoury and umami blast that tells you all you need to know about Cambodian traditional food.

You slurp down the slippery noodles and marvel at how the flavour of this dish wasn’t pieced together in a michelin-star kitchen, but rather in a street cart inside a Siem Reap night market.

And now you’ve been inspired to hunt down some chive cakes (nom ka chai), since the noodle shop owner said they’re the perfect thing for soaking up the leftover noodle broth left in your styrofoam bowl.

Who cares about carb counting when you can take a trip through Siem Reap, Cambodia, tasting an array of street food in one night. But wait, what’s this?

You see plump, flat cakes – bright white in colour and with speckles of dark green throughout – being cooked in oil on a griddle. The top and bottom of each flat cake is dark brown, making the white in between stand out like the inside of a roasted marshmallow.

The cakes are surrounded by the fog of garlic and chives that you’ve become accustomed to in this street-fair setting – and you still can’t get enough of it.

You explain to the owner that you want something to help you finish off your noodle broth. He smiles, and then serves you up two chive cakes in another soup. Great.

Being in a Buddhist country – where wasting food is strongly discouraged – you pour the remaining noodle broth over the cakes in their broth, and get a worried looked from the maker.

But you’re finding your Cambodian-street-food feet now. As you bite into the first chive cake, you start to see how the flavours of Cambodian food are different to Indian, Chinese, or Thai food, but also how they’re quite similar.

There’s the sweet-and-sour heat that spreads over your tongue first, so much like the Thai and Chinese-style dishes you’ve tasted before. Then there’s the garlicky after-glow that sometimes brings even more spice, similar to the taste of an Indian-style curry.

But it’s the combination of all these differences and similarities that makes the flavours of traditional Cambodian food at the Siem Reap night market stand out. Another key factor in the cuisine of Siem Reap, Cambodia, is crunch.

And since bugs are a big part of Cambodian traditional food, what better way to sample Cambodian-style crunchiness than by taking a bite out of a freshly fried beetle or cricket?

Cambodian’s – like many other Asian communities – have a long history of sourcing insects for protein when meat wasn’t easily available. And this tradition has carried on into the present. Trying cooked insects is one of the top things to do in Siem Reap for travellers, because it’s something many tourists wouldn’t have tried before. And at the Siem Reap night market, it’s made easier than ever before for you to take a bite out of almost any bug you can think of.

You’re tempted to try this traditional Cambodian food, so why not! You scan the selection, and suddenly feel yourself pressing your lips together. It’s one thing to think about chewing on a cockroach, but something completely different when you’re choosing which bug to put in your mouth.

But you want the all-round Siem Reap, Cambodia, street food experience, and decide that for a first-timer, fried crickets seem to be the safest option. They’ve been recommended by the seller, who says that crickets don’t pop like other insects, and so they’re an easier introduction to people from Westernised countries.

Biting down on a cricket is something that takes more self-motivation than you expected. You also didn’t expect the nutty, smokey flavour that you’re told is “what all crickets taste like”. But other than the slight sourness that hits the back of your palate right at the end, you could have sworn you’d eaten a couple of pieces of crunchy chicken skin.

With a satisfying selection of Siem Reap’s street food filling your stomach, and a fantastic experience in your memory bank, you know you’ve learnt about a part of Cambodia in a truly meaningful way.

Find out more about volunteering in Cambodia, and start planning your trip to Siem Reap’s night markets to taste the traditional food of Cambodia for yourself.

Further reading: What to do in Siem Reap

Tasneem Johnson-Dollie is a contributor for GVI, and an alum of the GVI Writing Academy. The Writing Academy is a skills-development program that pairs development editors with budding travel writers. Learn more about the program here.