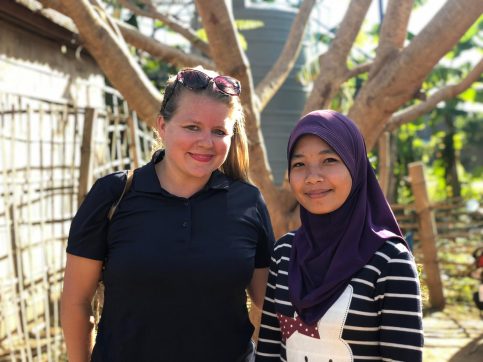 If you were to complete a quick Google search of modern obstacles facing women in Cambodia, you would quickly be linked to countless pages of research done on current inequality, including education, wage gaps, and domestic violence. For a volunteer such as me, such reading was necessarily sobering and humbled me to the lives of others. The intent of this blog post however, is not to join the volumes of western media articles that have contributed towards an image of the ‘third world’ as a hopeless wasteland filled with suffering and misery. Instead, I wish to give an insight into the lives of the inspirational women I have met on my program and the significant strides they are making as leaders of their communities.

To respect their privacy, the names of the women I have spoken to have been changed to other popular Cambodian names and the photos reflect the many women I have had the pleasure of speaking with rather than specific individuals.

Srey Janit works for an NGO here in Kampong Cham as a graduate of the program she now manages. Srey Janit has always been an ardent supporter of projects that provide students with a high quality education. With a difficult childhood, Srey Janit spent her teenage years fighting for her education, motorbiking long distances each day to gain access to schooling. Today, Srey Janit uses such energy in her role as a project manager overseeing educational projects for Kampong Cham’s marginalised youth.

When I met with Srey Janit we discussed a variety of topics, including the challenges that face today’s young women.  She explained that young women from her economic background are usually not sent to school but instead sent to work in factories. She continued by explaining that boys are more likely to be sent to school because of the pre-existing power dynamics. For many families, parents must make the decision as to which of their children will be sent to school, and which will support the family either financially, or at home. For many parents, the reality that a boy is far more likely to end up in a white collar job leads parents to the conclusion that educating their sons has a higher chance of success than if they were to send their daughters to school.

Towards the end of our discussion Srey Janit began discussing generational differences, stating that although her grandmother was denied an education purely based on her gender, attitudes have changed significantly and today an ever increasing number of women are being sent to school. Srey Janit concluded by saying much work is still to be done, but was confident that with outreach to more rural communities, even more women would be given the opportunity to receive an education. In Kampong Cham, there is a significant Cham community – a community with deep roots in Southeast Asian history and a significant population in Cambodia. Whilst visiting the Cham district in Kampong Cham, I met a sharp young woman named Srey Liya. In her first year of university – studying in China on a scholarship – Srey Liya majors in English Business with minors in English and Mandarin. After completing her degree, Srey Liya plans to return to Kampong Cham to work in finance and eventually open her own business.

Srey Liya then began to discuss her family and her sister, who she invited to join our conversation. The sisters then continued by illuminating to me their weight of societal pressures to marry and begin a family rather than to pursue a career. They also explained the constrictions on where and when a woman may be in public (or abroad) on their own. Both sisters stated that they knew many cases of peers whose families had curbed their ambitions, as well as numerous examples of families who had rejected such pressures and allowed their daughters to act on their ambition. Speaking of their own mother, the sisters explained that the older generations have had to adapt to the starkly different and modern aspirations of a generation that has never known the darker periods of Cambodian history and is less content with the status quo. Ambition and independence were central in almost every conversation I had with women from the community, and this theme persisted through my discussions with Ratana and Soriya. Growing up in smaller villages in Kampong Cham Province, both women expressed their desire to break with cultural norms.

Ratana has a passion for photography, a passion that is equalled in talent (at least to my unqualified eye). Ratana is keen to buy a new camera to sell her prints in the bigger cities, so for now she is saving money working other jobs in Kampong Cham. Soriya’s flair was not artistic but financial and has spent several years earning money so that she may self-fund her university studies as an English major. For both women, saving money has been crucial. The ambition and drive that emanated from the pair was palpable and our discussions reflected this. Both women are of an age where they would be expected to be marrying, yet both women are keen to deflect such pressures as they aware that the pressures of marriage and resultant motherhood would curb their ability to follow their goals. Rejecting such norms is particularly difficult given the intense centrality of marriage in Cambodia. To give a small insight, wedding celebrations often take 5 days and involve hundreds of guests in Cambodia. Over my project, I spoke to many women from disparate backgrounds and many provided contradictory views of how best to support women in the community. Some argued that financial support including micro loans to help young women open up business was what was needed. Others believe that educational tools and specific skills would help create a base foundation upon which women could empower themselves was the best course of action. Some believed that simply providing safe spaces for women to discuss topics that they cannot discuss with men present, or are excluded from when men are present would help instil confidence and further ambition in the women of the community. Ultimately all of these options are necessary and empower women to overcome the challenges of patriarchy. From my conversations, it is clear that times are changing and women in Cambodia are creating their own successes and it is inspiring to know that through discussions and workshops GVI is contributing to such progress.