+44 1727 250 250   Apply Now
Announcement
TRAVEL UPDATE: We're open! Where can I go? and answers to your questions about COVID-19
Home Volunteer in the Canary Islands, Spain
Apply Now
Enquire Now
Call Back Request

Volunteer in the Canary Islands, Spain

Step foot into the Canary Islands of Spain, off the coast of northwestern Africa. This Spanish archipelago is made up of seven volcanic islands surrounded by the Atlantic Ocean. Its waters quench the conditions coming off of the nearby Western Sahara and harbour some of the most interesting marine life in the depths of Spain’s oceans.

Volunteer in the Canary Islands and see the loggerhead sea turtle peacefully gliding between the sandy ocean floor and its sunkissed surface, and watch pods of Atlantic spotted dolphins socialising with their bottlenose friends.

From our island base in Tenerife, you’ll even spot the usually nomadic long-finned pilot whales that settle down between the islands of La Gomera and Tenerife. And as a volunteer for cetacean conservation – dolphin and whale conservation – you’ll be a part of efforts to conserve these species and their marine habitats.

Why become a volunteer in the Canary Islands?

Tenerife alone welcomes up to five million eager tourists a year, who come from across the world to see the island’s biodiversity. These include marine animals like whales, dolphins, sea turtles, as well as other marine life.

But, too many feet treading the island and its beaches means that the natural biodiversity is interrupted by an influx of tourism, boat traffic, overfishing and excess waste on the island shores.

That’s why GVI works collaboratively with local organisations to monitor and curb the effects of tourism on these natural environments, and contribute to dolphin and whale conservation in the area. And our programs are aligned with the objectives set out in the United Nations Sustainable Development Goals (UN SDGs).

GVI’s conservation efforts are also led by our badge of ethics, which represents our commitment to responsible and ethical best practices in all of our projects.

As a volunteer in the Canary Islands of Spain, you’ll assist with the preservation of marine life such as dolphins and whales. Here, you’ll gain valuable knowledge and practical skills, like species monitoring, data collection and reporting. That means you’ll up your resume and make an impact in dolphin and whale conservation at the same time.

What are you waiting for? Dive into cetacean conservation by becoming a volunteer in the Canary Islands of Spain.

Our marine conservation efforts aim to protect marine creatures, big and small, and the natural life cycle of all life underwater.

Where can I volunteer in the Canary Islands?

GVI operates in one location in the Canary Islands – Tenerife.

As a cetacean conservation volunteer in the Canary Islands, Tenerife offers you the opportunity to participate in activities such as ethical whale watching while monitoring and collecting data on marine life. And when you’re on land, beach sand will find beds between your toes while you take part in a beach survey or cleanup.

And maybe while swimming after a day of volunteering, you’ll flop between the sound waves of dolphins using echolocation to find food. But be sure to mind your step to avoid a bottom-feeding butterfly ray in the sand!

And, you can even catch sight of the Portuguese man o' war – a poisonous bluebottle that’ll sting to the touch, but will delight the eye with its purple and blue form.

The Canary Islands also offer many attractions on your days off.

Where can I go during my spare time?

What type of volunteer work can I do in the Canary Islands?

We work in cetacean conservation by monitoring and collecting data on whale and dolphin populations as well as other marine species.

As part of our efforts, we take photographs for identifying, cataloguing and location mapping these marine species. All our data is recorded and inputted into various databases. This data helps grow our body of knowledge around dolphin and whale conservation so that we can create sustainable solutions for the survival of these marine animals.

These solutions include recommendations on sustainable tourism practices, fishing regulations, waste management and other guidelines regarding environmental impact.

You can participate in one of the following dolphin and whale conservation programs:

What will I get out of volunteering?

How old do I have to be to volunteer?

Our programs in the Canary Islands, Spain are available to participants over the age of 18 who are interested in being a part of environmental education, cetacean conservation, whale conservation, or dolphin conservation.

How does GVI promote health and safety?

GVI holds the health and safety of our participants, staff and partners at the forefront of all of our decisions. We promise you support before, during and after your volunteer experience. GVI is guided by a comprehensive health and safety policy that covers all our bases worldwide. Our practices ensure that your health and safety is maintained during all volunteer activities.

To ensure additional protection during the COVID-19 pandemic, GVI follows updates from the Centers for Disease Control and Prevention (CDC) and the World Health Organization (WHO). We also monitor the UK, US and Australian government travel advice, as well as health advice from local governments in our volunteer locations. With this information, we’ve amended and improved on our extensive procedures and protocols to ensure that you have a safe experience with us during and after COVID-19.

Read more on our health and safety measures and stances here.

When can I volunteer during the year?

Whether you’re taking a summer vacation or you’re on a gap year, you can volunteer in the Canary Islands all year round.

Join GVI in dolphin and whale conservation and make an impact now. 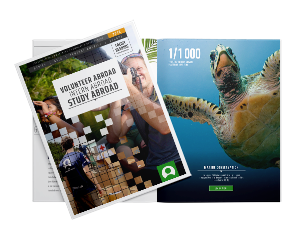 Why is Life Below Water so precious? What is UN SDG Goal 14? How can we conserve marine ecosystems through marine conservation [...]

Marine Protected Areas: What are they? Where are they? Why are they important? Find out how you can get involved in ocean [...]

Our Programs in the Canary Islands